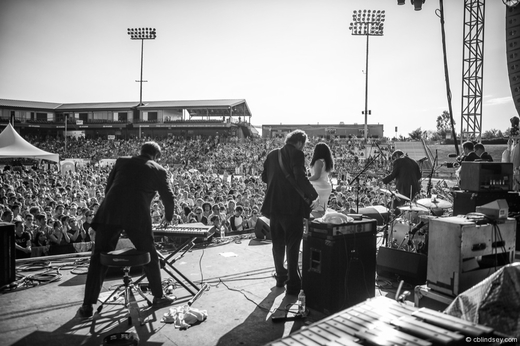 Classic soul meets rock and roll in this dynamic eight-piece collective from Chicago. The Congregation features Gina Bloom--a singer whose voice radiates with raw emotion and soul power. Charlie Wayne's punk-infused guitar riffs, Chuck Sansone's keyboard grooves and Joe DeBord and Dan Wendt's garage rock rhythms are topped off by the lively call and response of a three-piece horn section--Brian Crane on trumpet, Nick Nottoli on trombone and Erik Eiseman on saxophone. When it comes to the songwriting, you won't find any sugarcoated love songs here. You'll get a little bit of longing and a whole lot of wronging

The Congregation has been gaining steam since releasing its seven-song EP, Not for Sleepin', in late 2010. The band was named by the Chicago Tribune as one of "11 Bands to Watch in 2011”, and was recently featured in Paste Magazine as one of “10 Illinois Bands You Should Listen to Now”. The Congregation's stop-and-take-notice sound earned them the opportunity to share a triple-bill with Grammy-winning band Wilco and Andrew Bird this July, in addition to another stadium show in August with the Flaming Lips and Garbage.

The Congregation will make its full length album debut in September with the release of Right Now Everything.