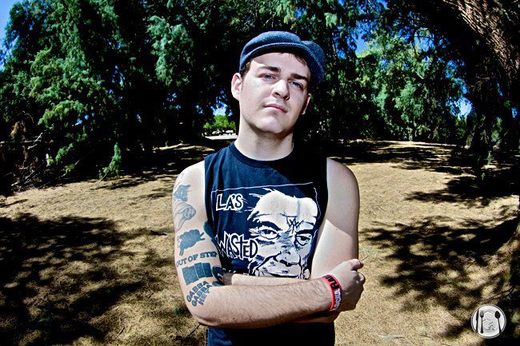 Born February 25th 1991 in Hemet, California, Jake Bowman has been described as coming from a musical background with his father playing guitar and singing blues, gospel, and classic rock songs as young as Jake could remember. When Jake was 10, him and his family moved two hours east of Hemet to Blythe, California. A year after the move, Jake received a Samick SG guitar along with a Gorilla 15 watt amp for his 11th birthday. As time grew so did Jake's skill for the guitar. Once he learned how to play his favorite songs from classic rock bands to punk bands, the love of music became very natural to Jake as he also began to learn how to play bass. During the mid 2000s, Jake had been playing with various punk bands all around Blythe at local showcases. Since 2007, Jake has been the bassist for the local punk band Majazlendie. Along side his time with Majazlendie, he also plays guitar for the hardcore punk band the Clepto Kids. Most recently, Jake and fellow band members of Clepto Kids, Chente Garnica and Taylor Johnson, have teamed up with the hip hop group, the Gooneez in early 2010 under the name, the Fratelleez as the Gooneez live band. Ever since the transformation, Jake has gone through a long journey of hittin' the road, playing the shows and meeting great people along the way. With the success of both the Gooneez and Majazlendie, Jake has opened up and shared the stage with artists such as the Adicts, Lower Class Brats, the Youth Brigade, Death By Stereo, East Bay Ray of the Dead Kennedys, Paul Wall, Chamillionaire, Too $hort, DJ Quik, Xzibit, DJ Warrior, Faith Evans, Kendrick Lamar, Wu-Tang Clan, MANN, Mac Miller, Big Sean, Wiz Khalifa, YG, Tyga, Warren G, Chris Brown and many others. Recently, Jake has put out an album with the Gooneez titled "Astoria" which features a track with up and coming Pittsburgh rapper, Mac Miller and also Los Angeles up and coming rapper, MANN. To find out how to download "Astoria", visit thegooneez.com He is also working on the first full length album with Majazlendie which is being produced by legendary punk drummer, Dereck O'brien(Social Distortion, Agent Orange, the Adolescents, Punk Rock Karaoke) set to be released in the summer of 2011. Whenever Jake Bowman's in your town, be sure to check him out where and who ever he may be with.