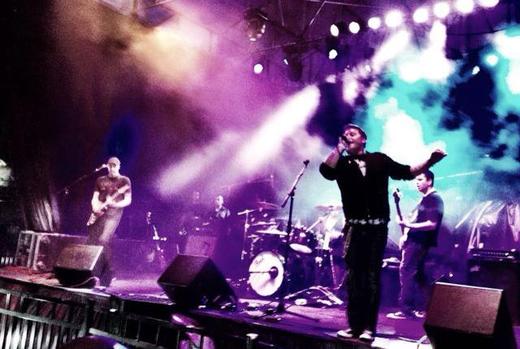 DIVE is a straightforward band of aggressive and melodic rock that compares to the sounds of Three Days Grace, Hoobastank and Linkin Park. DIVE formed back in 2004, taking time to create and focus their sound while playing local club and bar gigs around their hometowns. In 2007, The Truth About Us was self-released and eventually gained widespread attention for this dynamic band. The band spent th

e 2009 holidays at the legendary 4th Street Recording Studios in Santa Monica, CA to record their sophomore album "Picture Perfect" with producer Jim Wirt (Incubus, No Doubt, Live, Jacks Mannequin). The album was released through Sony RED on 5/11/2010 and is available on iTunes, Amazon.com and in stores at FYE, Hot Topic and Barnes and Nobles

"Picture Perfect" hits you fast and hard with a fury of tight rhythms and distorted guitars from beginning to end. Having a great record filled with addicting hooks and head banging beats is just not enough for these rockers. Its all about having the live show to back it up says Jonny Dive (lead vocals). DIVE consistently delivers a tight and energetic live show, going all out and leaving the audience screaming for more. Jonny, commands the stage as well as the crowd with his uncanny vocal performance while connecting with the audience through stories of love and loss. Will Lewis brings guitar to the next level with his amazing ability to deliver both color and drive. He is backed by a rhythm section with more than enough backbone between bass player, Joey Tone , and drummer Will Ferguson

In 2010, Dive headed to the new Meadowlands Stadium (Metlife Stadium) in East Rutherford, NJ to be one of the first bands to ever play the new stadium along side Bon Jovi and Train. They have also played with acts such as: Stone Temple Pilots, Alice in Chains, Three Days Grace, Flyleaf, Fuel, Halestorm, Sum 41, RED, Eve 6, The Ataris, My Darkest Days, Trapt, Creed, Saving Abel, Ryan Cabrera, 12 Stones, Taproot, Adema, Hawthorne Heights and many more

On March 20th 2012 the band released "The Acoustic EP" which featured 4 tracks from previous albums stripped down and raw and 1 brand new song called "Goodbye". The Acoustic EP is available on iTunes and everywhere music is sold online! After the release Dive hit the road to perform with Fuel, Black Stone Cherry, Cavo, Psychostick and more!

In June of 2012 Dive headed back to the Meadowlands in East Rutherford, NJ and took 1st place in the WDHA Clash for Cash

DIVE is currently in the studio working on demos for their 3rd full length release! Keep an eye out for a bunch of new tour dates coming to a city near you VERY soon