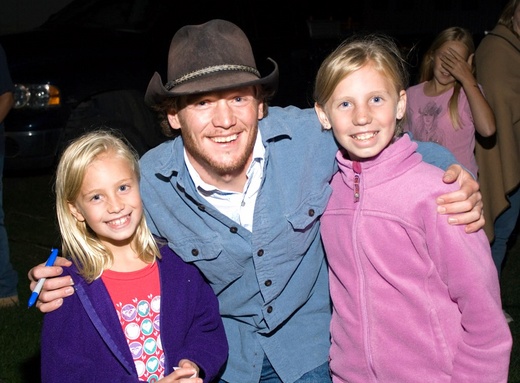 Bryan Ragsdale is a MODERN DAY MOUNTAIN MAN from Wyoming who writes songs about living life under a big blue sky.

Known as the eco-cowboy, his music reflects the values he was raised with, the values he teaches his own children, ideals that are often overlooked in mainstream music today.

Bryan redefines “cowboy cool” for the modern world with an upbeat mix of country, bluegrass, and folk with a little old fashioned cowboy swagger thrown in for good measure.

Bryan, a one-time Navy gunner’s mate worked in counter narcotics,boarding drug vessels in Panama to catch traffickers.
The salt of the earth working man toiled as commissioning foreman at a gas plant before dedicating his life full time to music. He enjoys fishing, camping, backpacking and drives a Prius to his gigs.

He plays over 200 shows a year at schools, festivals, libraries, coffee shops, and theaters around the globe.

His first single,
“Modern Day Mountain Man”, received airplay on over 500 radio stations worldwide , and was nominated for Country Song of the Year by the Independent Singer Songwriters Association and the Spirit Awards in 2009. His
latest album, Where Cowpokes Grow has been reviewed in numerous prestigious publications, including Country Weekly,
Maverick Magazine, Strictly Country, Big Blend Magazine, Strum Magazine, and the LA Times.

Bryan has donated thousands of CDs and countless hours to numerous nonprofit organizations for fundraising and distribution. He is a board member of Wyoming’s only arts advocacy organization, the Wyoming Arts Alliance, and a roster artist for the Wyoming Arts Council. He has shared the stage with many great artists including Winton Marsalis, Willie Nelson, John Rich, Michael Martin Murphey, and the Nitty Gritty Dirt Band.