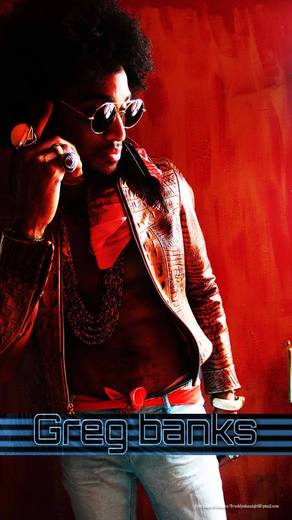 In a time where mediocrity has become the norm in an ever-changing music industry, only a few singers shine as true artists. But even then, Greg Banks is not your average artist. He has opened up for Multi-Platinum artist Lil Wayne, Trey Songz, Mike Jones, and Jazzy Jeff; won the B.E.T Black College Tour competitions; and has been featured on many radio stations and local television shows.

Growing up in New Orleans, Louisiana, Greg became accustomed to the city's love of great music and talent. He has always put forth a strong pursuit to thrive in the music industry. During his humble beginnings in the St. Thomas Housing Project, located in the heart of uptown New Orleans, Greg spent hours mimicking the musical ingenuity and unequaled artistry of Michael Jackson, Frank Sinatra, Stevie Wonders, Smokie Robinson, and many others. He believed that his aspirations would secure a pathway for him to make it out of the projects. Being a singer was uncommon in the projects, but Banks knew he was gifted; he dared not to give up on his dreams, no matter what challenges threatened his goals.

On August 29, 2005, Hurricane Katrina devastated New Orleans and the entire Gulf Coast. Just as it had impacted many, this disaster transformed Banks’ life just as well. Facing adversity, he could not imagine how he would continue his musical journey; but he knew that he would eventually find his way.

Despite the major setbacks posed by the wrath of Hurricane Katrina and the many barriers that encompass inner-city living, Banks rose to prominence in New Orleans by means of performing at local venues and winning numerous talent competitions. After meeting a local producer, Greg was able to record his first mix-tape and sell hundreds, gaining the status as a newfound celebrity throughout the state of Louisiana. After graduating from St. Augustine High School in 2007, Banks teamed up with Bay area recording artist G-Eazy to record the song “Candy Girl”. The two would then follow through with a music video, garnering over 60,000 views on YouTube.

In 2009, Greg released his independent debut, The Time is Now, which erupted with over 80,000 Myspace song plays and 3,600 fans. He also has 5,000 Facebook friends, which is the maximum amount, and over 4,000 fans from around the world on his Facebook Fan Page.

Currently unsigned, Banks is performing at even more venues with his live band, which he believes adds more flair to his performances, while preparing to release his second album. With an eccentric style, a unique taste for fashion, and a voice that is unmatched and unparalleled, it is no exaggeration that the world of music will never be the same. Get ready for the Greg Banks experience, for his time is now.
« View This Artist's Complete Profile
Connect with OurStage: Facebook Twitter YouTube FourSquare Newsletter RSS feed
ADVERTISEMENT
?Need help?
Copyright © Amazing Media Group  2006-2023
p
A
n
E
F
Song Title by Artist Name
987654d
LM
iAnEAqqqq