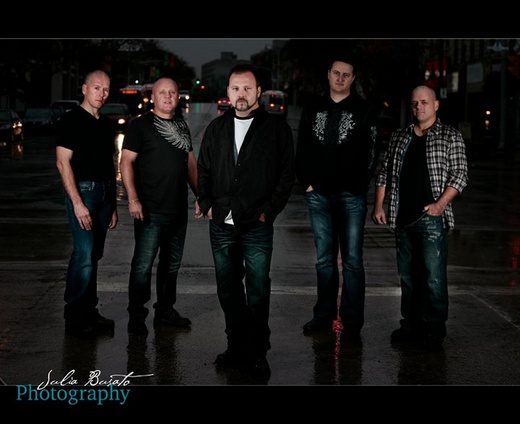 Full Turnout is a Rock band, from the Guelph/Milton area of Southern Ontario Canada. Our music features strong vocals out front, driven by melodic lines, that will leave you singing everytime. Although Rock based, our music easily crosses other genres such as alternative pop/rock, and yet still maintains a sound that is distinctly all our own. Lyrics that open a door everytime, combined with music that compliments your journey, with elements of mystery, longing, joy, hope and excitment. In 2006, Full Turnout began as a group of Firefighters, jaming and writing original music. In 2008, our first cd was born, Perfect Neverending. A great accomplishment in a short year, to write, record 14 tracks. The feedback from the public and other indi platforms was amazing. We took a long hard look at ourselves, and where we wanted to go, and how we could grow as a band. We knew we had the right mix with Pete Zettle on drums, along with his lifelong bandmate Brian Parisotto on bass, together containing and driving our music. Dave Drexler, a friend of our producer, joined the band as our frontman, and voice. We recognized his talent, and abilities were boundless. Brad Dugas, our producer and studio owner, expressed an interest in joining the band. Matt Krusky, the Rhythm guitarist and writer of Perfect Neverending, began working on new songs with Brad. "Just Seconds Away" and "Hang on" were the first two products of that writing team. "Just Seconds Away" came in first place on "Our Stage" in March 2010 in soft rock. "Hang on" was voted a #1 song of the year on the revolutionary indie show, Fame Games. Both songs have achieved top 10 status on "Our stage" thru out 2010/2011. We knew we had something magical, with these kinda results. "Adversity", our new cd, is the result of 2 years of hard work, and intentional crafting and honing of the Full Turnout sound. Full Turnout members include Dave Drexler on lead vocals. Matt Krusky on Rhythm Guitar. Brad Dugas on lead/rhythm guitar. Brian Parisotto on bass guitar. Pete Zettle on drums.

In July of 2012, Full Turnout has released two new singles, "Nobody Wins" and "I Simply Love You" . These two singles feature singer/songwriter Eddie McKenna on vocals, and bring a whole new flavour and sound.