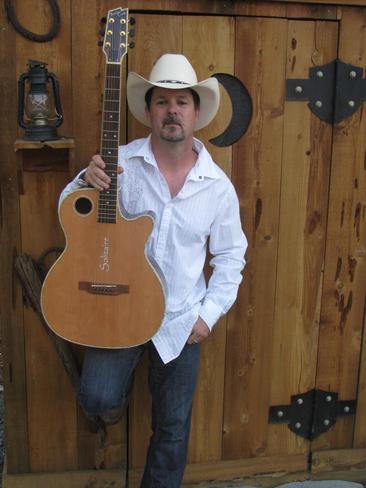 This Northern California Native, Bobby McDowell is set to light up the stage brighter than the sun in those big western skies. Much of his musical passion was evident from an early age as he started pounding out rhythms on a set of drums. However, music wasn't his only love. McDowell's family moved a number of times across The Golden State, but racing motorcycles became a steady friend that never failed him. With is first race at 7, many more years followed on into professional racing that propelled him to events all across the country. Eventually settling down in a small one horse town, Mcdowell took root with his country fashion staples consisting of an old Chevy truck, t-shirts and levis. Today the Artist still makes his home on those quiet hills and enjoys taking in the sun with his family, a small cluster of animals and his Harley for joy rides when he gets the notion. Being back "home" led him to once again turn to a dream he had left, long over due-music. This time, being behind an instrument wasn't enough, and McDowell decided to push for center stage. After playing the circuit of smoke filled dives and long forgotten bars, McDowell knew it was time for a transformation and sought out production on a project in Nashville. His first album "The Climb" was the audiences initial look into what more this artist had to offer than just typical cover tunes. Things were still slow going and once again change was in the air. Like so many other unknown entertainers, this one was giving himself an ultimatum to either get it together of leave music for good. Fortunately, fate stepped in a firm foundation began to take hold. Now his future is not only bright, but grounded in strong values. hard work and unbridled passion to succeed. With nothing stranding in his way, Bobby McDowell is once again recording, pressing to get his songs out and looking to be the hottest new male artist coming out of country music.