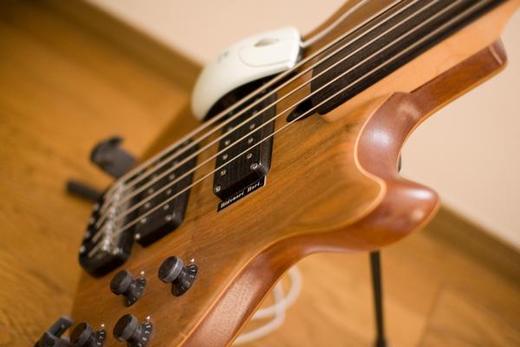 The "House-eey" is my original music style and unique genre. I know many people are gonna confuse it because it's very similar name of "house music". But it's really different from house music. I had been trying to find fitting and fitting common genre with my music but it was really waste time for me. The name called "house-eey" was described in Japanese which means a kind of homemade. But it's not a right word as Japanese language either actually. I just say "eey" instead of "kinda" in Japanese. There is no meaning of the "house" music in the "house-eey". You might well think it's like a techno or electronic music, but maybe it ain't right genre.... 'Cause it's the house-eey. ;-)

What kind of the genre then?

The "House-eey" has been inspired by 80s music scene especially US/UK pop music, new age and alternatives except I perform unique flavor in it. That is the "Bass". All of the House-eey tunes are played by fretless bass guitar. This concept makes a signature sound of the House-eey.

It's a little difficult to explain that because the "House-eey" is project name of my music. If I need to tell the band name, usually I'm using "House-eey". So maybe you'll think about "Hide" too. It is my nick name for acting the music. So, originally I used to use "Hide" for band name because it's equal as the artist name of one-man band. But you know... there is so many "Hide" as nick name in the world! Then I've mixed my nick name and concept name "Hide: House-eey" for labeling my name in this world. It's complicated, isn't it?

In 1987, Hide composed the first music by cheap home keyboard. And then Hide was challenging composing many songs by this keyboard. Hide doesn't have any of skill or chord progressions for composing music but it was no matter to create the music. And later, Hide got computer(PC) to challenge creating sound and song. It's written by MML(Music Macro Language) that was necessary to play the music by computer.

In 1990, Hide was playing the drum in the band 5 years and this experience improved the "rhythm" skill. Also at same time, Hide got cheap ebass guitar. This happening was really important and then Hide is playing the ebass continually over 20 years.

The "House-eey" has been started in 1994. Initial concept is "fun with computer music". It was so simple. The name called "house-eey" was described in Japanese which means a kind of homemade. But it's not a right word as Japanese language either actually. Hide says "eey" instead of "kinda" in Japanese. There is no meaning of the "house" music in the "house-eey".
First 10 years(between 1994 and 2003), Hide was composing music by computer but didn't play ebass guitar for it. Hide tried to compose many genre such as Techno, Jazz, Rock, Pop and Game music. But always couldn't satisfy those songs because Hide wanted to play bass guitar too.

In 2004, made big change to the "House-eey". Hide has met DAW(Digital Audio Workstation) system finally and it was realizing to record bass guitar by computer. Also the concept has been changed to "fun with bass guitar and computer". And now, Hide is composing music by this system and performing the "House-eey" since then.

Another site of the House-eey