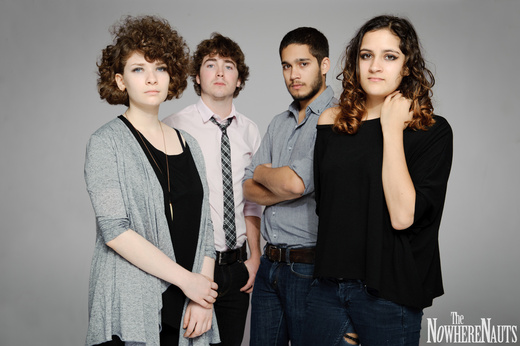 The NowhereNauts are songwriters and musicians based in New York City. The band members (Sofie Kapur, Hunter Lombard, Anders Kapur, & Tony Franco) began their musical journey in their teens playing many of the city’s most well-known music venues, where they gained not just confidence, but also earned the respect of industry veterans.

The NowhereNauts are a forceful, propulsive unit. Anders Kapur’s muscular bass lines are melodic, dodging and weaving between Hunter Lombard’s sinewy leads and penetrating rhythm work. Sofie Kapur’s vocals exhibit intimacy one moment, soaring power the next; and Tony Franco’s high-energy drumming propels the band forward, ensuring that their sprawling melodies stick with you long after the songs themselves have ended. The band is a puzzle of inextricable interlocking parts: extract one ingredient, and the alchemy would crumble.

Anders, Hunter and Sofie first started collaborating in 2007, but it wasn’t until early 2008 that music educator and former Guided By Voices drummer Kevin March brought them together to play. In 2010, the band enhanced their sound further when they added Tony on drums. Since then, under March’s tutelage, The NowhereNauts have honed their songwriting and instrumental chops in rehearsal studios in Williamsburg and Manhattan, recorded at legendary studios The Magic Shop and Stratosphere Studios and played in music venues all over New York City, including The Knitting Factory, Cake Shop, The Living Room and The Bowery Ballroom, where they opened for legendary art-punks Shudder to Think.

The NowhereNauts recently completed their debut self-titled album, which has met with early critical praise. Never content to sit still musically, they rattle off a fresh set of original tunes every few months, each featuring new experiments and inventions. This is a band that is constantly evolving, a band that fearlessly embraces change, a band you will want to catch at every stage of their evolution.