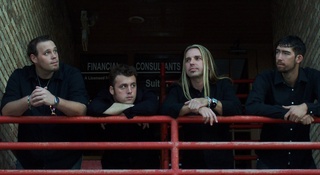 Power Surge, was formed in February of 2008 in Kissimmee, Florida. Through trials and tribulations throughout NY and Florida, Jeffrey Guy and Anthony Cucorullo found each other while playing in different bands. The two merged talents and started performing all over the state of Florida as a duo while searching for other talented musicians who shared their same passion for music. Finally a group emerged on the scene as a band with no name. While playing a local venue, the circuit breakers kept cutting out resulting in “Power Surges.” The event suggested an appropriate name for these gentlemen.
In addition to their musical talents on stage, the members of Power Surge also like to write and rearrange songs. They compose lyrics and melodies as a team for all the songs that they perform. The band performs a wide variety of songs ranging from modern day rock, classic rock, southern rock, rap, reggae, blues and even country.
Power Surge has an alluring and almost magnetic stage presence that grabs you from the beginning of the show until the very end. It’s almost as if you’re on the stage with them as they perform.
In addition to their musical and performing talents, Power Surge also has the physical appeal for mainstream marketability. Their style and appearance is a plus to their on-stage audience appeal.
« View This Artist's Complete Profile
Connect with OurStage: Facebook Twitter YouTube FourSquare Newsletter RSS feed
ADVERTISEMENT
?Need help?
Copyright © Amazing Media Group  2006-2023
p
A
n
E
F
Song Title by Artist Name
987654d
LM
iAnEAqqqq