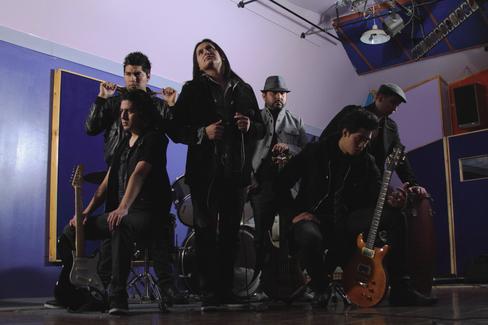 Vida Tinta is a Latin Alternative rock band that formed in 2008, who have their roots from Compton, California. The majority of their music is based off of personal struggles, love circumstances, and socioeconomic issues seen from a very humanistic approach. The trio consists of Eddie "Ettien" Plata who is on vocals and rhythm guitar; Juan "Juanito" Garcia who commands on lead guitar; and Dario Sanchez on drums.
They initially began as a garage band in 2006 in Juan's humble garage. They began, as with any other band starting a dream, to play covers from bands that they loved. They covered songs from iconic Rock en español bands, such as Maná, Enanitos Verdes, Soda Stereo and Heroes del Silencio to name a few. Their evolution as a band pushed them to create, write and arrange their own songs.
In the summer of 2008, they had a once in a life time opportunity to begin to record their first record. They took full advantage of that opportunity and in April of 2009, they independently released their first full length album, "Ya No Hay Amor" on iTunes. The first album was a successful accomplishment for the trio.
2009 proved to be a busy year for the band as they started to play more and they were becoming more in demand. In a year's time, they had already played at some of Los Angeles' well known venues, such as the House of Blues on the Sunset Strip, the Hard Rock Cafe Hollywood, the Whiskey A Go Go, the L.A. Convention Center, and the Home Depot Center among others.
As Vida Tinta began to grow, so did their lineup. In 2010, they introduced two new members to the band, the brothers Luis "Louie" Espindola and Miguel "Mickey" Espindola, on guitar and percussion, respectively.
In 2011, Vida Tinta finished their second full-length album with 10 original songs, along with 2 remake covers. They anticipate their new album release in Spring 2011.
« View This Artist's Complete Profile
Connect with OurStage: Facebook Twitter YouTube FourSquare Newsletter RSS feed
ADVERTISEMENT
?Need help?
Copyright © Amazing Media Group  2006-2021
p
A
n
E
F
Song Title by Artist Name
987654d
LM
iAnEAqqqq