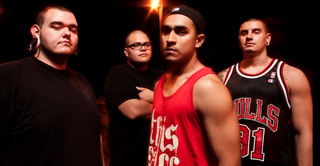 Having met each other through the Chicago-area music scene, the members of Rooks formed in 2009. Ever since then, they have been quickly making a name for themselves among metal fans with their unique sound. They have risen above the typical “metal band” stereotypes by bringing a new genre to the table through the use abstract time signatures. Rooks creatively fuses rhythmic metal and hardcore in order to create a sound that provides an intense experience for listeners. The music is easy to listen to, yet somewhat difficult to grasp.

Following the release of their successful debut EP,
+ x – (Addition by Subtraction), which was self-produced and released by the band, Rooks has been playing shows throughout the Midwest. The album features the band’s unique style with blistering tracks like “Truth” and “Windy City Real.” Rooks even collaborated with former Dead to Fall vocalist, Jon Hunt, who supplied his vocals on “Bounce.” Never a band to slow down, Rooks is already back in the studio working on their second EP, and they will begin playing shows across the country in the coming months.
« View This Artist's Complete Profile
Connect with OurStage: Facebook Twitter YouTube FourSquare Newsletter RSS feed
ADVERTISEMENT
?Need help?
Copyright © Amazing Media Group  2006-2023
p
A
n
E
F
Song Title by Artist Name
987654d
LM
iAnEAqqqq