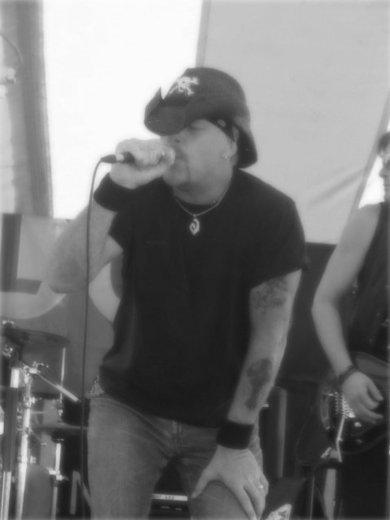 It's hard to put over 25 years of life as a musician in a short bio however I'll try...

I was born in Croydon England (much to my Scottish parents shigrin...lol). My family immigrated to Canada when I was 5 years old.
I grew up in Toronto Ontario Canada and went to college at Seneca (Newnham Campus). I left college to pursue a music career in 1983 with a Cambridge based cover band called BRATT. My audition at "The Welly" in Barrie Ontario was awful however they saw something in me (very thankful for that...) and I was hired. We toured Ontario relentlessly playing every shit hole and dive imaginable for the next two years.

When BRATT came to it's demise in 1985...the following year, drummer Jamie Constant, guitarist Mike Reinhart and I started a band called SYRE. We held auditions in the Helix rehearsal hall in Kitchener and soon hired charismatic singer Doug Weir, bass player Chris Caron (and... when Mike left the band) Chris's brother in-law Rick Mead came on board.

SYRE scored a P & D deal with A & M Record in Canada, Redlight Record in the US and Sony Records in Japan. We toured constantly, some years playing upwards of 250 shows! We played with several world renowned headlining bands over the years and put on a live show that was the terror of many bands that played with us.

In the early 90's our style of music came to a sudden halt when 'grunge' took over the music scene, which (in turn) quickly put an end to our deal with A&M. SYRE's live playing schedule slowed and the guys started working on their own projects and taking time for family.

After playing in a few covers bands in the local club circuit..in 2004 I decided to write and record a solo CD released in 2006 after a long sabbatical from the 'original' music scene. I recorded Me, Myself & You! at home playing, singing and producing everything myself. It was a fun process and I didn't really care how well it did...I was doing this for myself and having fun! As it turned out fans loved the CD and many musicians complemented the production (as cheap as it was...) which I was very proud of.

I put together a live band and played several shows after the release of Me, Myself & You! During that time I started putting ideas together for my follow up CD. It was intended to be released much sooner than it was...however due to the illness and ultimate passing of my father in 2009 (and other personal health challenges) it was put on the back burner.

Finally in 2012 I released 4 of the songs for the follow up CD as an EP 'Believe v1.0' co-produced by Darren Morrison. Darren has also recently joined my live band along with Peter Schafer (guitar) and my good friend Jeff Harris (Bass). The EP has been received well and I'm looking forward to playing the songs live with what will be a killer live band!