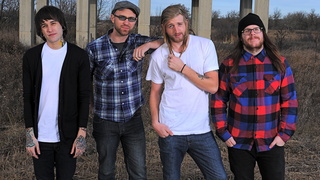 Hope Atlantic is a band comprised of best friends: Jordy, TJ, and Matty who all grew up in a small town outside of Winnipeg, Manitoba. It was there that the trio met and subsequently began their musical journey. Despite growing up together, it was while playing in separate bands that the trio "learned the ropes" of the music industry.

TJ joined up with five piece rock band, Sick City. After only a few short months , this new band was signed on to Trustkill Records (Worldwide) and Smallman Records (Canada). Sick City played on Taste Of Chaos, Vans Warped Tour, as well as toured across North America with bands such as Papa Roach and Mayday Parade.

While TJ and Matty were touring and recording for close to 3 years, Jordy took the time to do some traveling of his own. Jordy's travels brought him to Oklahoma where he wrote, what were to become, Hope Atlantic's first few songs. After a year down south, Jordy realized his heart was at home in Winnipeg. He returned to find both TJ and Matty available to play some songs with an old friend.

The trio then rounded up their line up with new friend and pianist Jeremy Penner. Jeremy also spent time aboard and was first introduce to the trio upon his return from British Columbia. With his addition, Hope Atlantic was born.

In only a short time, the band's unique grassroots approach at pop rock has quickly resulted in a dedicated fan base. At this time, their fan base has expanded from Winnipeg throughout Western Canada where they recently supported digital multi-platinum artist, Stereos.