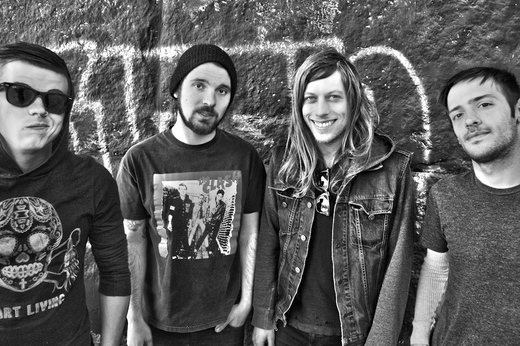 The intersection of persistence, perseverance and pure talent is only the starting point for bands emerging in the digital age. For THE COMPOSURE, this mix has fueled a nonstop thrust of power-pop energy from Pittsburgh to the world; a journey that continues for the band on March 13, 2012 with the release of their aptly named EP: STAY THE COURSE

Assembled in 2007 by singer/guitarist Paul Menotiades and drummer Cory Muro, THE COMPOSURE has taken a simple foundation of sweet pop-punk, and built layers of infectious rhythm soaked in Menotiades’ sugary melody. Rounded out with slick harmonies from guitarist Seth Milly and the snapping pulse of bassist Johnny Grushecky, the band’s signature blend feels comfortably familiar yet refreshingly new

“There’s something inviting about the songs we write,” Paul explains. “We want there to be this connection - that our fans and listeners feel like they’re right there with us - in the moment of each song. They’re not only singing along but relating to each and every word.

And Menotiades knows a thing or two about fan connection. As a staple in the Pittsburgh music scene since high school, Paul found international success at young age with the band Punchline, emerging as one of the city’s most accomplished outfits

Cory, Seth and Johnny weren’t far behind, either. Each of the guys spent years in various rock outfits that collectively racked up hundreds of shows, tours and songs, with each of the three emerging as well-oiled machines in their own right

So when THE COMPOSURE was born, there was no delay in opportunities presenting themselves to the seasoned unit. Within days of the band’s first demos hitting Myspace, veteran producer Marc McClusky (Weezer, Ludo) contacted the band about working together. Meanwhile, legendary producer Mark Trombino (Blink 182, Jimmy Eat World, Midtown) heard the recordings and offered his involvement, too

The resulting work was Strings Attached – a debut LP that introduced THE COMPOSURE to the world by sticking silvery pop-punk flavored rock in the heads of listeners everywhere. The band then hit the road – sharing the stage with everyone from Bruce Springsteen to Allstar Weekend – and never looked back

So it’s only fitting that The Composure delivers STAY THE COURSE – their sophomore release – right as the band is doing just that. Overflowing with that signature meld of tight-locked power pop, the EP’s six songs are polished and pure, ready for sing-a-longs and sharing

“This EP is a snapshot of the natural progression of The Composure,” Muro explains. “We didn’t have to lock ourselves in a studio to fabricate new material. These songs are just what we do, and I think they’re easy to relate to because they’re very real and come straight from who we are.

From the first seconds of album opener Stay Away From Me – with driving punk backbeats – to the bouncy closer Satan, STAY THE COURSE tightly weaves the band’s past four years of musical growth through their solid sonic foundation that has captivated audiences since the first note