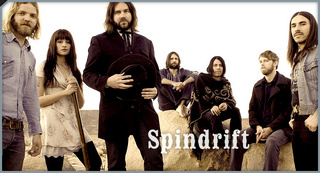 Mixing the dusty, cinematic soundscapes of old spaghetti-western films with the mind-expanding Psych Rock of modern practitioners like The Dandy Warhols and Brian Jonestown Massacre (not to mention drone forefathers The Velvet Underground), L.A.’s Spindrift makes music that sounds like what one would hear while tripping in the desert on a vision quest.

Originally formed by singer/songwriter/guitarist Kirpatrick Thomas as two bands — an East Coast Rock one and a West Coast version more in line with Thomas’ Ennio Morricone jones — the frontman bled all of the influences into one and dropped anchor in California, forming a seven-piece band (including former BJM and Warlocks members) to re-create the spooky Old West sounds in his head. The unique hybrid caught the ears of Sex Pistols’ guitarist Steve Jones early, leading him to champion the band on his popular L.A. radio show. Since then, Spindrift has worked songs into movie soundtracks — most notably the indie The Legend of God's Gun, in which the band’s music plays a starring role — and are currently enjoying success with The West, the band’s first album for the Dandy Warhols’ Beat the World label.

The feature film "The Legend of God's Gun" was officialy released on July 29th 2008.