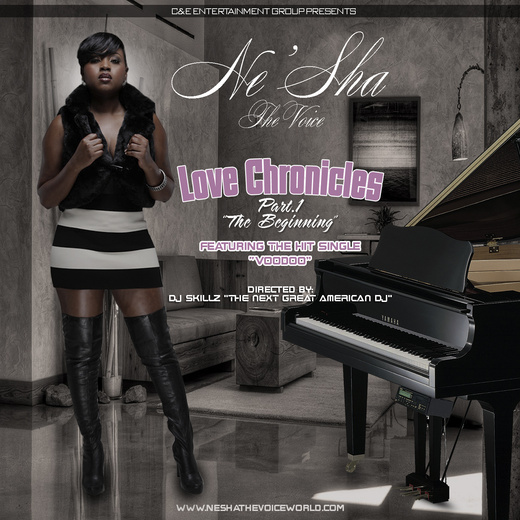 Ne’sha The Voice, a South Carolina native who has literally exploded on to the Southern music scene in 2009 winning her first independent music award for "Best Female R&B Artist of the Year" (Queen City Awards). The South Carolina-born, has established a reputation for herself in her hometown of Bennettsville as she is being touted as “The Voice of the Carolina’s by her fans and several music insiders. She’s a 5x award winner for her accomplishments as a music artist (2011 Levitate Magazine, 2011 South Carolina Music Awards, 2011 South Carolina Underground, and 2010 Gee Chee Magazine.

Ne’sha, began her music career at the age of 6 by joining her father’s band; Starlight Choir. As a member of the Starlight Choir she opened shows for prominent organizations such as, the South Carolina Black Caucus, The NAACP and the SC State Senators Convention. At the age of 12, she was introduced to manager Cheryl Butler (former A&R of Qwest Records) who placed her in the group Rain. Rain, the all-girl trio was fortunate enough to grace the ears of many record executives but soon disbanded due to the personal complications of one of the other members. Thereafter, she began working with Vincent Herbert of Black Ground Records (former label of R&B singer Aayliah). Vincent Herbert loved Ne’sha’s material and was working extensively with her when a tragedy struck that would leave Ne'sha fighting for her life. In a near fatal car accident, Ne’sha was forced time off from the music industry leaving her no choice but to relocate back to her hometown contemplating her future as a recording artist.

Three years later and fully rehabilitated, Ne’sha returned to the music scene signing a recording contract with an independent label based out of North Carolina and started working on her first album; “Diary of a Woman Scorned”. “Diary of a Woman Scorned” drew mixed reactions at the time of its regional release; critics liked Ne’sha’s vocal talent but were unmoved by the selection of material. After one album on the independent label, Ne’sha opted out of her contract citing creative differences as the reason.

In 2010, she signs a production contract with a well-known producer based out of Charlotte, NC named Tim “Krazy Figz” Walls; they worked extensively in the studio creating a new sound. Summer 2010,  she releases her first hit single "Voodoo" the song hit the airwaves gaining notoriety and enormous radio spins throughout the Carolina’s and internet based, it was voted the most requested song on the "Homegrown Cipher" in her region (WYNN 106.3FM).  In 2011, she collaborates with DJ Skillz (Formerly of Rocafella Records) and producer “The Mighty D.R” out of Charlotte, NC to work on her first street album “Love Chronicles” Pt 1. The album a soulful crafted selection of old school R&B over hip hop tracks giving the energy and overall effect that she has on her audience(s). “Love Chronicles” Pt 1 brings together her many soulful influences citing everyone from Mary J Blige, Chaka Kahn, Lil Mo, and Betty Wright to name a few.

Nesha is heading back into the studio with Music director DJ Skillz and producer Mighty DR to work on her 2nd mix tape “Love Chronicles” Pt 2 set to release winter 2013.  She is perfecting her unique and diverse sound that transcends the genres of R&B, Pop, Soul and Hip Hop. She is definitely on top of her game with music everybody can relate to. Ne’sha continues to write her own songs, record and perform captivating shows while preparing for the mainstream.

This Soulful Songstress is ready to start a new phase in her career; she definitely has the potential to become one of the next big names in the music industry.