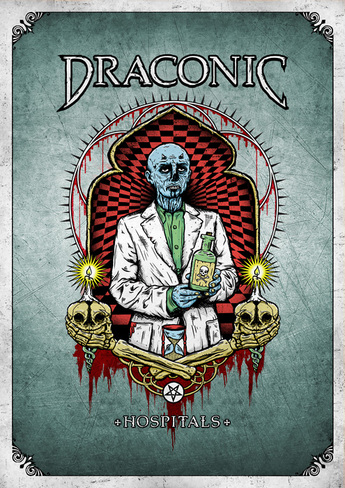 Draconic’s musical journey began in 2003 as a project of keyboardist Branislav Stankovic, who with the help of studio musicians from some of Serbia’s most prominent metal bands, recorded an album entitled “Conflux.

Once the promotion of “Conflux” had ended and the band began working on new material as a group, it became glaringly obvious that the new line-up had no interest in continuing to write music in the symphonic black metal style of the debut

Draconic spent the next several years honing their craft live and in the studio, writing and demoing new music, and searching for the right musicians to complete the new lineup. The culmination of this process came in the fall of 2008, with the completion of the band’s second album “From the Wrong Side of the Aperture.

The band creates music that puts lessons learned from the past into a modern context, providing the listener with metal that is both impressive and futuristic, but also sincere and rooted in tradition

The band inked a deal in late 2008 with Austrian metal label Noisehead Records, who releases “From the Wrong Side of the Aperture” worldwide on April 3, 2009

After two turbulent years filled with various turmoil and having to make changes to the band's lineup yet again, Draconic are starting a new chapter.

The band will be releasing a single entitled "Hospitals" in the summer of 2011.