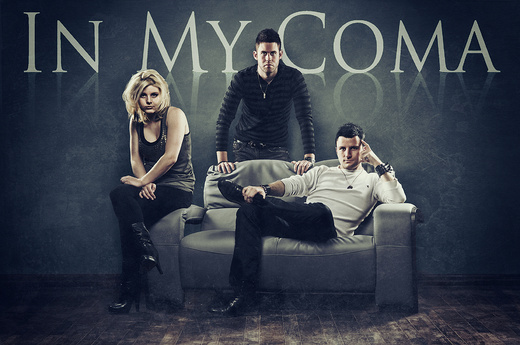 In My Coma is the brainchild of vocalist/songwriter/guitarist Jasper James. Though Jasper has spent the last several years in southern Ontario, Canada, the foundation of his musical creativity rests in his English heritage. Born in Guildford, a small city south of London, England, Jasper grew up listening to the popular British bands of the 80s, thanks to his father's passion for the music.

IMC’s music combines the energy and loudness of modern rock with the dark and melodic characteristics of Brit-pop.  Focusing on a world where so much still remains undiscovered and unexplained, the lyrical side of In My Coma conveys unusual stories with themes of death, darkness, and fear, fused with ambiguous elements of hope and human potential. The musical compositions compliment the lyrics by combining unusual chord progressions and an off-the-wall blending of notes. All of these elements fall into place in IMC’s radio-friendly songs that are constructed to be meticulously melodic.

“In My Coma is about open doors, both musically and aesthetically,” asserts Jasper. “A friend said that our music made him picture ‘magnets and miracles,’ which is a brilliant way of explaining ourselves and what IMC is all about. We’re all connected, and sometimes bad things happen, but nothing is without some form of purpose.”

In My Coma’s debut album, available now from Sounds+Sights, is appropriately titled "Magnets & Miracles". IMC seeks to experiment with their musical adventure. The album will be a collection of interrelated songs about darkness and human connection, with formidable elements of heavy rhythmic rock and electronic sampling. As Jasper puts it, “With our first installment, we don’t want to ring people’s doorbells, we want to kick the front door down.”