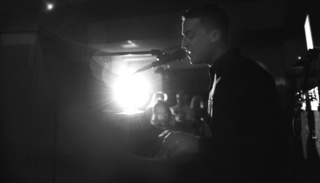 Steve Torres loves People, loves Music and loves bringing them both together! An active duty military man, Steve has and continues to travel the world, but calls South Florida his home. His style is a mixture of his influences, from his bluesy/soul/R&B roots growing up on his dad's Motown records, Stevie Wonder, Ray Charles and on to Billy Joel - all color his piano style. Meanwhile, Contemporary singer-songwriters have motivated him to expand his guitar skills and write a lot of music in that genre as well as pop.

Steve would love to make his living in music, but also treasures serving his country in the Armed Forces despite the limitations it places on his musical aspirations!

Steve's lyrical influences are his faith, his family, his experiences and the experiences of those around him. He began to realize his love for music and his desire to share his gifts as a worship leader at his church, but soon began to realize that his writing could speak to the "churched" and "unchurched" alike. He also moonlighted at a dueling piano bar for a summer, which taught him the importance of versatility as a musician :)

"Everyone struggles at times, and everyone has moments they wish they could hold on to forever. Music should capture that, empathizing with and encouraging those that are down and rejoicing about the good things in life."

As Steve Says:
"Live to make a difference, treasure the moments you spend with those you love and get through the good and bad with faith and by writing about it... These songs are bound to strike a chord in one or two other hearts out there!"