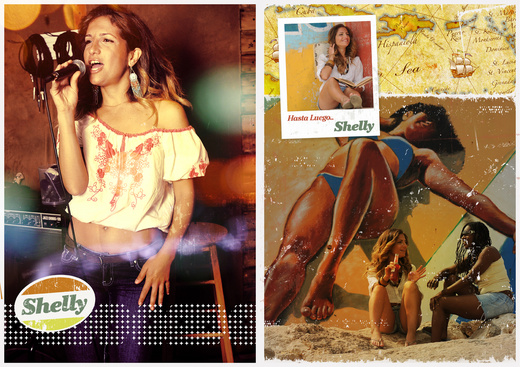 A creative singer songwriter. Composes her songs in Spanish, English and Hebrew in A Ethnic-Latin album - ShiverIn which she combines the sensuality of Latin music with the Mediterranean hot tempo. Shelly, 28, was born in Israel, to an Israeli father and Colombian mother. Her family raised Shelly cultivating her Jewish roots together with the culture and the Colombian customs. From early age, she learned to appreciate the Colombian music at the same time that she was exposed to the musical Mediterranean culture. At the age of four, Shelly moved to Colombia for two years; there, she encountered her maternal Latin roots and a big, warm family that lives in Cali- the salsa capital of the world
On her return to Israel, she started elementary school which she complemented with studies of theatre, music and dancing, activities that have formed part of Shelly's life until today. At the age of 18, she joined the Israeli Army, where she contributed as an instructor of martial arts in schools and military bases, for two years.Upon finishing her military service, she travelled to New York, to study theatre, professional singing and classic and modern ballet, in well known establishments such as "Neighborhood Playhouse School of Theatre", Broadway Dance Center and HB Studio. Parallel to her studies, Shelly performed in famous Funk and R and B clubs and "The legendary Apollo Theatre"
Nowadays, Shelly is in the middle of preparations for a big show that will include songs from her first album combined with Colombian folklore music. Major Labels in Israel and abroad have shown interest in Shelly's musical career and have established contact with the singer in order to become part of Shelly's international success.