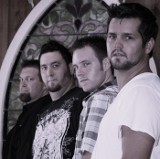 Descending New Angels isn't a mainstream rock band. Alternative is the best fit for declaring genre, as the band melds elements of classic and southern rock with grunge of the 90's.

DNA originated with Randy Shanks and Erik Simpson, adding Keith Thurnau (drums) and Mike Titchenal (bass) in 2007. Shanks writes the lyrics and most of the music, and the group practices eight hours per week, playing out 4-6 gigs per month. Like many artists, they aren't able to quite those day jobs, but that leap is the goal.

Even in the current economy, DNA doesn't struggle to find regular paying gigs for performing their original music. In the midwest, that is testimony to talent. Shanks says: "Without a doubt it's much harder to make money doing original music, particularly in the Midwest music circuit. We're pulling it off, and that's very gratifying."