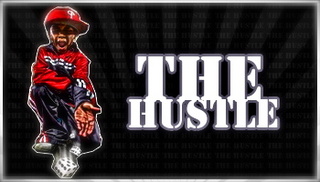 Melding elements of Hip-Hop, Rock, Soul, Jazz and Funk into one cohesive and melodic sound, the Philadelphia based group, The Hustle, is a progressive hip-hop band with a colorful and energetic sound. The Hustle has a diverse appeal based on their impressive musical dexterity. They are the perfect hip-hop alternative to hardcore and gangsta rap.
Their music is rooted in traditional hip-hop, but instead of looped samples or beats they feature live instrumentation and mesmerizing vocals. Their lyrics focus on abstract philosophies and socially conscious messages that incorporate positive and realistic themes, such as finding and losing love and the importance of being true to oneself. The Hustle has shared bills with various artists and groups including Indie Rockers, Jam and Pop Bands, as well as Singer/Songwriters. They are able to perform comfortably within many different genres, while still defining their own individual sound.
The Hustle was founded in 2007. MC Kuf Knotz and Singer La Ru front the group with their inspiring and often mesmerizing vocals. Band members include musicians Tom Copson Jr. (guitar), Bradlee Beats (Drums), Kurt Shakemore (Bass) Dj Kingspin & Squirrel Mike (Keys). The Hustle has inspired a strong following in Philadelphia and the surrounding areas and has been fortunate to have experienced great local support and radio play of their EP song, Run Wit Me.
Influenced by many progressive acts ranging from Outcast and Common to Radio Head and Beck, The Hustle sounds like nothing else in hip-hop.
« View This Artist's Complete Profile
Connect with OurStage: Facebook Twitter YouTube FourSquare Newsletter RSS feed
ADVERTISEMENT
?Need help?
Copyright © Amazing Media Group  2006-2022
p
A
n
E
F
Song Title by Artist Name
987654d
LM
iAnEAqqqq