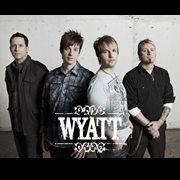 Critically acclaimed by Billboard Magazine, mixing soulful country and classic rock, award- winning WYATT is set to take fans by storm with their new album. Daniel (Danny) Fortier’s and Scott Patrick’s captivating vocals and guitar skills, Cam Ewart’s bass and Bray Hudson’s drums create the rockin’ country sound of Saskatchewan’s very own WYATT (a band name inspired in true wild west fashion after the famous Wyatt Earp, best known for his participation in the Gunfight at the O.K. Corral!). Their catchy lyrics and mixture of country-grooves and hard-rock rhythms will surely get audiences up on their feet. The band has electrified fans across North America and has shared the stage with many country music stars including Rascal Flatts, Carolyn Dawn Johnson, Jason Aldean and Emerson Drive. With a rapidly growing fan base, their high energy performance and humour-filled on stage chemistry reaches audience members of all ages time and again.

2012 proved to be an exciting year for WYATT, recording a new album, signing a record deal with Canadian label MDM Recordings Inc., and the first single “Jesse James” dropping on Christmas day. The new record (set for release May 2013) was recorded at THE ARMOURY Recording Studios in Vancouver and was produced by CCMA award-winner and Juno-nominee Mitch Merrett. The first single “Jesse James” is an up-tempo track filled with killer guitar riffs and toe-tapping stick-in-the-brain lyrics “I wanna line ‘em up and drink ‘em, I wanna love ‘em and leave ‘em, sometimes I just want to rob a train…”

Exclaims Scott Patrick, “We are really excited about this new project. The experience making our last album gave us the confidence to push the envelope and really evolve and refine our sound. Right from the initial talks with Mitch (regarding the album’s direction), we knew this one was going to be a pure WYATT album – rock n’ roll with a country soul. It was an amazing experience to write and record these great songs with a producer who is willing to stray outside conventional lines.”

Throughout the years WYATT has proudly received many accolades and awards including Saskatchewan Country Music Awards (SCMA’s) Group of the Year for seven years in a row (2008-2014)! Additional accolades include the 2008 Rising Star SCMA and Astral Media’s NEXT BIG THING in 2009. “Receiving the support and recognition from fans and your home province is one of the main reasons we can be successful doing what we do,” says drummer Hudson. The band was also a finalist at the 2010 OnStage.com Bon Jovi’s Wanted: A SuperBAND Tonight contest placing 2nd out of 131 artists and won the ourstage.com ‘Capital Hoedown Showdown’ to open for Rascal Flatts in Ottawa and was stoked to rock out this fall at the 2012 Canadian Country Music Awards (CCMA).