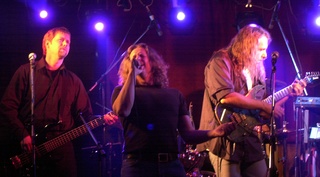 The band started out in 1986, and shortly thereafter, they won a competition and were awarded studio time in the same studio that TNT, STAGE DOLLS and TINDRUM used for demo recordings. The four-track demo lead nowhere, as
the band split up due to jobs and studies.The band members did however keep in touch and gave it another try at the beginning of the 1990s, only
to understand that the market for this brand of music had disappeared.

In 1999, it was time for a third attempt, and the result was a three track demo that needed a first class singer. As luck would have it, Bjorn showed on the TV one night, doing a powerful rendition of Wanted Dead Or Alive on the national TV-show, Starsearch.

The success of the songs encouraged the band to give it another try and the whole of 2000 was spent rehearsing and gigging. An unsuccessful attempt at co-operating with a Hollywood producer lead to the recording of a soundtrack CD that unfortunately never turned out the way it was intended. All the while, the band finished writing and recording their own album, "Midnight In Paradise". The album was released in Europe through MTM Music in 2002.
The long overdue, sophomore effort came in 2008, with the release of "TWO" in the US & Europe via Perris Records and Japan through Spiritual Beast.
« View This Artist's Complete Profile
Connect with OurStage: Facebook Twitter YouTube FourSquare Newsletter RSS feed
ADVERTISEMENT
?Need help?
Copyright © Amazing Media Group  2006-2022
p
A
n
E
F
Song Title by Artist Name
987654d
LM
iAnEAqqqq