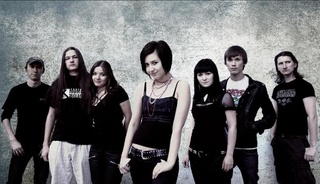 About SKENB The band named Skenb was formed up in spring 2005 in Tashkent city (Uzbekistan). Dmitriy Bedyukhov, the main composer and major song writer can be considered the band’s founder. At that moment Skenb consisted just of three members including Dmitriy – there were also a bass player Yevgeniy Bazarov who shortly after left for Russia for good and a lyrics writer Irina Negrienko. During the following year (2005) the staff altered many times. Finally the band found the very participants it needed.
These were Sabina Saydaminova (vocals), Renat Khidirov (drums) and Kamil Vagapov (bass and subsequently rhythm-guitars). When they joined the band, Skenb’s history officially began. Later Adelya Safarova (keyboards) in 2006 and Nur Kudyakov (bass) in 2007 formed the final staff of the band and after that this staff didn’t change.

Skenb actually play “alternative metal”. However it s obvious that the band is moving towards the complexification of its music. Within 2005 – 2008 Skenb took part in many dieferent projects and gave a lot of concerts (incl. solo performances). The particitpation in such festivals as “Creating Legends” 2006 and “Iosis Fest” 2007 can be considered the most significant concert events in the band’s development history.
In summer 2008 Skenb left Tashkent city concert grounds to start up its first album, the release of which is expected by the end 2009. Meanwhile the current vocalist Sabina left Uzbekistan and thus the band. At the moment Skenb is in search for a new female vocal singer.
« View This Artist's Complete Profile
Connect with OurStage: Facebook Twitter YouTube FourSquare Newsletter RSS feed
ADVERTISEMENT
?Need help?
Copyright © Amazing Media Group  2006-2022
p
A
n
E
F
Song Title by Artist Name
987654d
LM
iAnEAqqqq