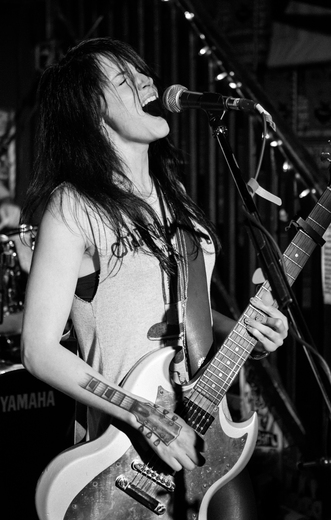 Cobra Ramone might have been a fraction as happy finishing high-school and becoming a Quantum Physicist at NASA as she is playing music but probably not. Her name alone got her into trouble at her Catholic Schools (and the occasional stint at the Juvenile Detention centre) and her affinity for stilettos and army boots work much better on a stage than in a laboratory. Legend has it she was born punch-dancing in a coastal town in New Jersey, stole a car at the age of 3 and moved to the oil and cowboy city of Calgary, AB in Canada. Some speculate she was raised by dinosaurs and space-kittens, but the Ramone family very adamantly disagree. After finding an ancient guitar in a church basement and deciding that high-school was getting in the way of her pot-smoking and song-writing, she moved to Vancouver, B.C..

Having a mixture of musical favorites like Howlin’ Wolf, Motorhead and O.D.B has turned Cobra into a Gibson SG wielding musical mutt with roots in JD soaked scuzzy blues-rock. Cobra Ramone has followed the musical forces across Canada and beyond several times. In 2011 she moved to a tiny and dangerous island in South America where she wrote some of the songs on her new self titled record while avoiding bandits. With the face-melting genius of Brad Smith, Jay Sparrow and Fred Brenton, Cobra ground out a 10 song record with subjects like the apocalypse, zombies and the occasional bitter “men-are-jerks-so-throw-them-off-a-building” ditties.. In finding her new musical boyfriends (and Vancouver music scene heavy-weight champions) Big Daddy Deachman (drums) and Trevor Snakedust (hammond B3) Cobra Ramone has completed the ultimate musical tri-force. Their main objective is to be the first band to play live on the International Space Station. BOOM!