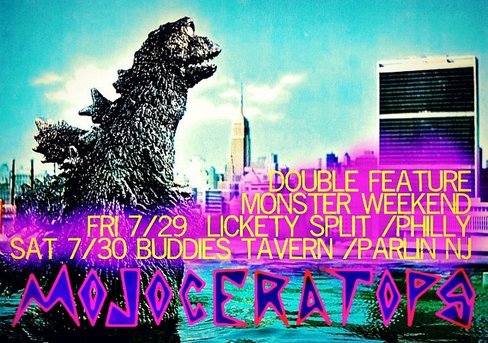 "Mojoceratops is a fire breathing, sunglasses wearing, funk endowed creature from the Cretaceous period."
The funk beast, recently reappearing on earth after spending a few million years at an intergalactic dance party, took note of how drastically unfunky Earth parties had become and decided he was just the dinosaur to change that. Using an arsenal of funk-infused, danceable beats, radio friendly hooks and fun, inventive lyrics, Mojoceratops is aiming to save Philadelphia and then the whole world from the dull mediocrity that has pervaded our planet’s parties. The quartet was formed in March of 2011 when long time musical comrades Jerome D'Agostino and Brent Penman met veteran producer, bassist Robert Felsted Jr. The next step was to add a super bad-ass villian guitarist who could crank out some overdriven purple volcano lightning over the groups tunes. This addition of Schweers finished the high-energy dance party lineup. " In a mere two months they have recorded an album of 11 dance party hits, honed their live show in the Philadelphia club scene and have used social networking sites like facebook to reach out to fans in the tri-state area. With a modern, yet danceable sound, radio friendly hooks and playful lyrics. This is one project with serious traction from the start.

Mojoceratops is a plant eater about the size of a hippopotamus, appearing about 75 million years ago during the Late Cretaceous 10 million years earlier than its well-known cousin, the Triceratops.

The species, which is related to another dinosaur in Texas, is found only in Canada's Alberta and Saskatchewan provinces and was short-lived, having survived for only about one million years.
" 'mojo' is an early 20th-century African-American term meaning a magic charm or talisman, often used to attract members of the opposite sex," The full name is Mojoceratops perifania, with "perifania" meaning pride in Greek