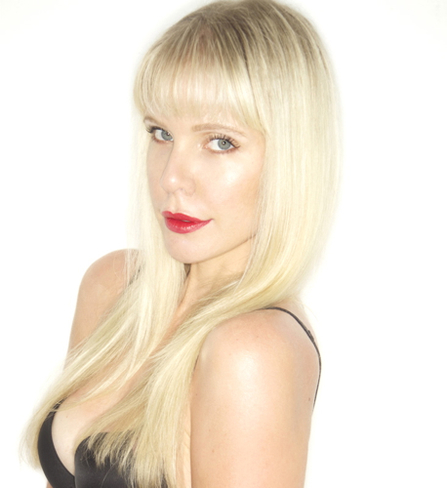 Kelly Harper is going to dispel the nasty rumors that a beautiful blond is more fluff than substance. She is a fresh energetic performer with an unstoppable drive and an unwavering devotion to her craft. As a singer and songwriter she is her own woman. There's no question she's poised to make her artistic mark in a big way and she already has with the release of her debut hit smash "New Best Friend " striking at number 38 for four weeks on Billboards R&R Top 40/CHR charts. Proof that she is armed with an arsenal of hit songs, tracks from her debut record are already being played on radio stations both nationally and overseas. Kelly was born and raised in the small town of Lewistown, Pennsylvania. As an introverted young girl Kelly found her joy in music. She would spend hours singing along to her mother's records performing for her dolls and stuffed animals. It was music that brought Kelly out of her shell and into the limelight. Throughout her teens Kelly only desired two things, a stage and an audience. Kelly bought a piano and taught herself how to play it. "Performing was just something I had to do; it was like breathing to me." After graduating high school Kelly felt a yearning to travel and explore the world. "I always knew there was more to life then the small town I was living in. I constantly felt like I was going to miss something and never fulfill my dreams if I stayed in my hometown". The door to Kelly's freedom opened when a modeling agency signed her and took her to New York City. "It was an amazing time. I was working a lot, making good money and enjoying the nightlife of New York City. But all the while I was missing my dream and first love, music." After two years of successful and consistent modeling Kelly began to burn out and knew it was time for a change. With a notebook full of songs, her guitar and suitcase, Kelly walked away from a modeling career and moved to Los Angeles to pursue her music dream. Always the go-getter Kelly began writing and playing with local musicians and songwriters almost immediately once she arrived. Hollywood music supervisor, Debra Baum chose the song, "New Best Friend" from a catalog of over a thousand songs for placement in the feature film, "Thanks to Gravity." Three of her songs have already been featured on the Bunim/Murray Productions number one rated show on the Oxygen Network "Bad Girls Club", MTVs "Road Rules," and "Real World." And the most recent addition on the popular new show on the "E" Channel, "Living Lohan." All of which have licensed her songs. Kelly is avidly catching the attention of the media. Such as her upcoming interview with the highly followed blog, www.PopCultureMadness.com. Her song,"Till This Goes Away" has also gained some spotlight; winning the Best Song of the Month Contest awarded by the acclaimed www.SingerSongwriterUniverse.com. Look for her in both of these publications! "I write the kind of songs I believe everyone can relate to. We all share the same feelings, and I think I've expressed those in my songs. I can't always say what I feel in person, but my songs allow me to say everything loud and clear". Kelly is currently back in the studio working on her second album with producer Rob Wells. You can all look forward to Kelly touring in fall 2016 with all new material! The tour will be celebrating the release of her new EP. With a Gibson endorsement, a national tour under her belt, unrelenting worldwide radio airplay, along with tv and film placements, you can be sure that you'll be seeing a lot more from Kelly Harper. Be sure to watch for this rising young star!