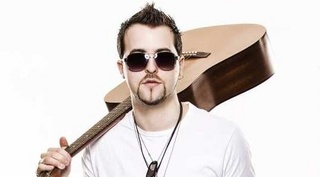 "This is a velvety album, with a nice, slow vibe. Best of the lot is ‘Jealousy’, a clever and beautiful ballad that has already become Kall’s “signature” piece." 8/10 - Confront Magazine

Presenting his debut release 'Notes In Neon', Montreal native Arthur Kall, showcases his vast song writing capabilities and overall, innovative musical talent. Synchronizing fine-tuned melodies with memorable rhythms and unrivalled vocal tone; Kall has been garnering the attention of critics. To no surprise as the unique collection of acoustic, pop-rock tracks offers listeners many unforgettable anthems such as: 'Young & Alive', 'Grow Up', 'Driving Me Crazy' and a collaboration with Underground Realroad entitled, 'Can’t Stop.'

His new solo debut album was co-produced by Richard Vincent of Red Rhino Recordings, and there was additional collaboration with Josh Ferrel (Ex Guitarist of Big Wig) and Underground Realroad. The seasoned musician is ready to take the stage. In prior musical endeavours, he has had opportunities to open for acts such as Simple Plan, Mobile, Idle Sons, Reset and many more.

Kall has toured extensively performing in Toronto, Ottawa, New York, Long Island and of course, his home province of Quebec. On top of it all, a firm believer in using his time and talent to give back to the community; Kall supported the Musicians Against Parkinson’s (MAP), where he worked closely with founder Robbie Tucker to set up events which raised funds for the cause.
« View This Artist's Complete Profile
Connect with OurStage: Facebook Twitter YouTube FourSquare Newsletter RSS feed
ADVERTISEMENT
?Need help?
Copyright © Amazing Media Group  2006-2022
p
A
n
E
F
Song Title by Artist Name
987654d
LM
iAnEAqqqq