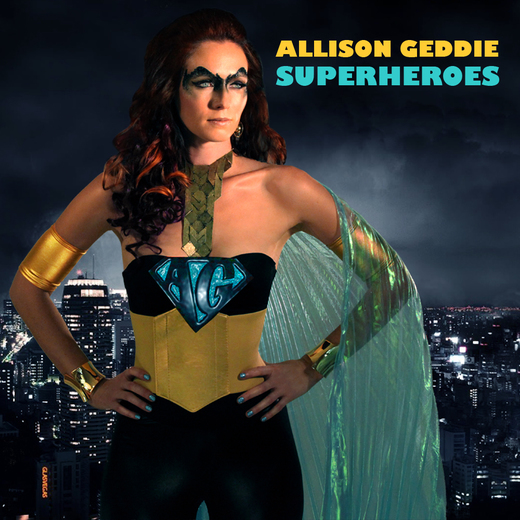 Allison Geddie is not your typical American girl.  Born in NYC, Allison began her fascination with music and the arts. At twelve years old she was already sowing the seeds of what has grown into a love of composing and performing music. Schooling herself on artists like Ben Harper, Alanis Morisette, and Rob Thomas, she picked up her father’s guitar and began instinctually writing her own songs. By fifteen she booked herself a gig at a local café in Connecticut, and her music career was born.

Allison graduated High School early and traveled to New Zealand where she studied at Hungry Creek Art School.  Deprived from her instrument, it was in Auckland where Allison purchased what would become her signature image, a blue Sonic acoustic guitar.  Shortly after, she relocated to Los Angeles, where she received her BA in Film Production at LMU. Allison spent a year in Germany documenting the lives of prostitutes and heroin addicts living on the streets of Duesseldorf. She shot a documentary in Afghanistan, where she filmed a traditional Buzkashi match, an event from which women are typically barred. While in Kabul, she taught Afghani students to use HD cameras and to edit their own films. Having traveled to over thirty countries, Allison became a firm believer in educating and inspiring the youth of the world.

After her travels around the world, Allison settled back in Los Angeles and rediscovered her calling as a music artist.  Allison’s stunning presence and musical ability is garnering her an ever-growing fan base, which isn’t surprising; serious music fans know a good thing when they hear it. With melodies sometimes delicate and haunting, sometimes raw and unbridled, her lyrics hint at life’s deeper, darker truths – truths that invoke in listeners a powerful and palpable sense of connection, inspiration, and belonging. As a result, she’s constantly booked in clubs throughout L.A and her songs have been featured on ABC’s “The View” and “All My Children.”

Geddie’s intelligent, thought-provoking lyrics reveal stunning layers of her vulnerability, and are often reflective of relationships and transitions in her life. She says, “When I was seventeen I played a song for a girl who was a few years older than me, and she had to leave the room because she was crying. And I discovered that people can relate to my music, and I felt honored that someone really got my songs, that she was living inside of my words. I felt heard.”

Geddie’s signature style reveals itself in melodies and lyrics that often take unpredictable and surprising turns, riveting the listener with stunning depth, power, and beauty, haunting them for days and weeks to follow. Her songs range from the self-effacing “Fixing Me” where she writes: “I’m trying to live and let be/ but I can’t control my thoughts./ I want to be true to you/ but the liar calls the shots./ I try to be everything that I know I want to be./ It feels like life is just one long road of fixing me.” to playful lyrics of her generation in songs like “What we Lived For (The Starbucks Song)” where she croons: “We’d always drive our car to Starbucks…/ and we’d look for our fathers in 19 year olds.”

As for her first record, Everything You Don’t See, she says, “I wanted to make a beautiful album. I have a wide variety of songs, and I wanted to keep the beauty theme running throughout. We added cello and chimes and piano. I wanted to make sure that the album stayed close to the way I wrote the songs on the acoustic guitar, organic, yet with all the added elements of the band.” The songs are at times slow and dark, at times riveting and raw. Her refreshing vulnerability takes us to a place where she is willing to courageously bare her naked psyche, like the album’s title suggests, letting listeners in on her most private emotions and thoughts.

The range we see from Geddie in her first album is both masterful and fresh, just like her performances, with a sense of consistency not usually seen in a debut record. With her rare combination of deep intelligence and stunning beauty, she has simultaneously created a classic sound that seems warm and familiar, and yet, is completely original, destined to win hearts from the get-go.

Allison has opened up for acts such as the Blue Öyster Cult, Tristan Prettyman, and Justin Nozuka and has released three music videos since her start in 2007.  Now, as the co-founder of the non-profit ArtistsPalooza, Allison is part of a passionate team that is building an artistic movement in Los Angeles that empowers artists to empower the world.  Through her music, film, and humanitarian work, Allison inspires people to live life to its fullest and through that inspires the children of the future.