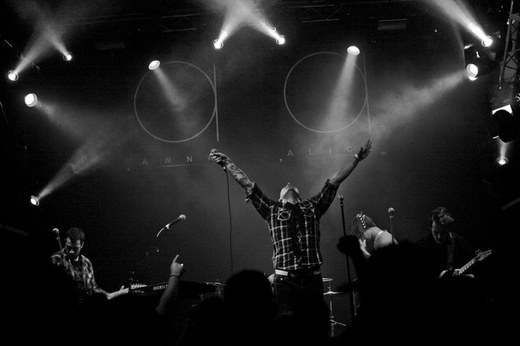 ALICE ANNA emerged in the spring of 2010 when singer/songwriter Daniel Strauch wrote and recorded a new solo original album on the piano with producer Jeremy Griffith (Saosin, Cartel, Norma Jean). Daniel's EP was written to bring closure to the breakup of his previous band of six-years (“The Secret State,” Jax, Fl). The music documents his trials and tribulations on the road and shares the many life experiences he gained along the way. It was never intended to reach the ears of anyone other than those close to him

That changed as a copy of the album played at JA Murphys tavern on Aliceanna Street in Baltimore. The can’t-get-enough attitude of those who heard it was enough to convince Daniel to undertake a new project. He began collaborating with childhood friend and songwriter Michael Marx to develop new material. The two quickly reached out to guitarist Josh Jones from Daniel's previous band, and local musicians, Hunter Schafer (Bassist) and Scott Smith (Guitarist), to further their sound. They chose the name “Aliceanna,” after the street which brought them together.