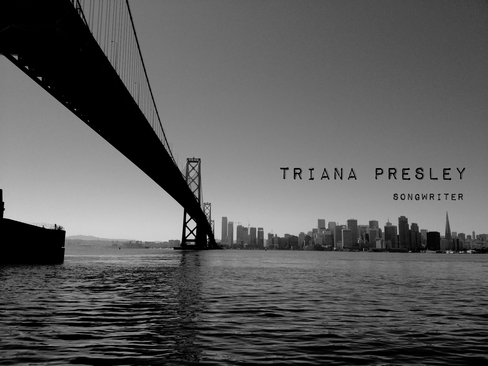 THE SOUND
Reared on the open strings of west coast rock and the rhymes of the great folk legends, Triana's songs are simple and memorable. With elegant lyrics that convey profound emotions and catchy melodies, her songs are powerful and honest, yet accessible and unassuming.

"Beautiful!  Both the music and the lyrics are great.  And I’m really, really fussy about this stuff.  I have very little patience for bad or trite or un-thoughtful lyric writing.  Triana has such a beautiful way with words.  Her lyrics really paint a picture." - Jennifer Lee, Musician and Performer

Triana's songs have been described as a blend of contemporary folk, pop americana, and west-coast rock, with an own old-soul, poetic edge that adds a personal and deeply authentic touch.

The Great American Song Contest "appreciate[d] the poetic aspects" of Triana's lyrics, praising her songs for their "good structure" and "strong melodic elements."

THE ORIGINS
Hailing from Berkeley, CA, like many young songwriters, Triana grew up playing the piano. After becoming rhyme-obsessed during a poetry unit in the fifth grade, she combined picked up songwriting. To this day she has never put it down. Her first completed song, Christmas Without You, was written about her recently deceased cat. No, this is not a joke. At eleven years old, it was an incredibly emotional moment in the young songwriter's life. Now writing about life, love, and growing up, Triana’s songs have grown with her, maintaining their youthful charm but evolving to touch upon the experiences and emotions of an adult.

THE JOURNEY
At fourteen, Triana had taught herself to play the guitar in order to diversify her song accompaniments. In high school she enrolled in music theory and music history classes, while outside of school she continued to study piano, guitar, and songwriting. Composing for hours everyday after school, songwriting became more than just a hobby; it became an obsession. After getting a job, Triana had saved up enough money to record her first demo. Kaydence was recorded at Broken Pretzel Music with the help of songwriting teacher Robert Temple, and recording engineer Jeff Rolka.

While attending Barnard College of Columbia University in New York City, she continued her musical education in and out of class.  She worked at a start-up entertainment company, Moscow 57, while enrolled full time in college. Immersed in the New York City music scene, she gained first-hand experience in professional songwriting, music promotion, and artist management, as her work included the crafting of a budding record label, and producing live shows. Continuing to write songs and perform her material at small venues around New York City, Triana garnered many positive reviews, sharing the stage with artists such as Kayte Grace, Cleve Douglass, Cici James, and Ellen Kaye.

After graduating from college, Triana is now pursing songwriting with more vigor than ever before, recording her second demo, Dirt Road Waiting, with the help of Ben Bernstein at Petting Zoo Studios.

Triana is a member of The West Coast Songwriters.