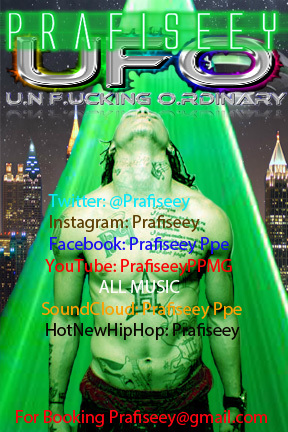 Andre Reece Hafer (Born October 30, 1992), better known by his stage name Prafiseey. Growing up all over the U.S. and coming up from the streets gave him a greater advantage in adversity and outlooks on life. Prafiseey Began rapping at the age of eight. In 2001 he was noticed by Snoop Dogg and his crew at the (Up In Smoke Tour) where he began to really push his music. Years later finding him self on stage with (The Game) In 2006 he linked up with T-Pain and Nappy Boy Ent where he released his first major track later called (Only 16) that was released through Exclusive J on the (Independent Artist of the Year Mix-tape) Along the way linking with many major names and labels in the industry and hitting many major tours he has put his name out enough to let his music and performances speak for him. Today he own's his own music group/label called Pure Prophets Entertainment which is also a clothing line. Having the ambition and drive he has as well as his wording, smilies, and metaphors he puts together he is obviously one to be acknowledged.