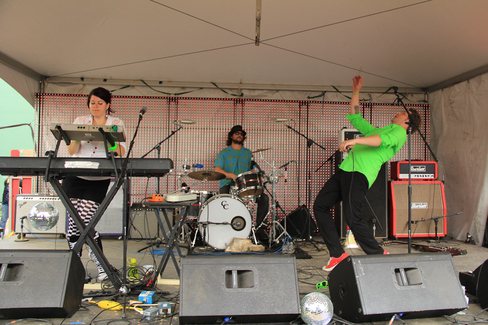 Fresh out of Kansas City, Molly Picture Club’s first full-length self-titled albums drops March 3, 2012, which is just in time for a short tour prior to exploding into Austin, TX in a burst of glitter and disco balls for the SXSW festivities.

The self proclaimed “dark disco” band itself is composed of equally flashy musicians.  Heavily influenced by 80s and 90s punk, Hungarian-born Aniko Adany adds punchy synth and raw vocals backed by the afro-beat and Latin influenced rhythms of drummer Matt Hayden, while front man and lead guitarist Michael Tipton accentuates the group’s music with yelps and quips that form the characters in MPC’s songs. The music they bring to the stage is a dance-centric pop attack with Bowie-like bravado. Present Magazine said of their 2010 EP “Four on the Floor is an impressive debut that should easily appeal to anyone that appreciates 80s New Wave…Bonus-these songs are danceable.”

2011 was full of successes for the band: their song “Satellites” was featured on Fuse TV in April as part of their Unsigned Acts promotion.  The video was a collaborative effort with the band and German film maker Knut Holst.  In July, MPC partnered with Tinderbox Music to reach a broader audience with college radio, which resulted in air time on over 100 college radio stations nationwide, several of which MPC charted in the Top 20 for a number of weeks.  In October, the group signed licensing agreements with 17 television shows for use of their music on such shows as Keeping up with the Kardashians, Teen Wolf, The Real World, as well as other shows on Discovery, A&E, E!, VH1 and MTV.