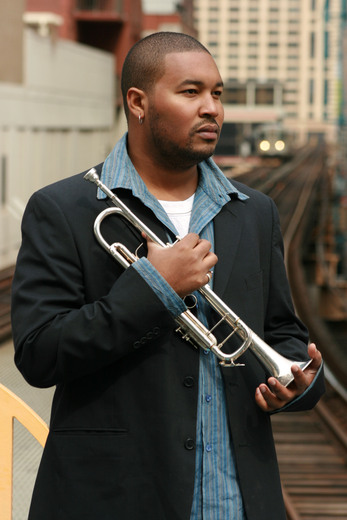 Kafele, trumpeter, composer and producer, has been playing the trumpet for over
20 years. The name Kafele (pronounced kuh-FAY-lay) is of African origin, and
means “worth dying for”. Born in Baltimore, Maryland and raised in Baton Rouge,
Louisiana, Kafele was rst exposed to jazz by his parents. In fact, he attributes his
love and appreciation for jazz to his father who often listened to recordings of John
Coltrane, Freddie Hubbard and Miles Davis among others. Later, his brothers and
sisters introduced him to Hip-Hop and R&B. Later, after becoming a Chicago
resident for about 10 years, Kafele was inundated with lively, upbeat house, afro-
beat, and other types of dance music. This musically enriched background
provided the inuences that helped cultivate his unique sound. While attending
Southern University in Baton Rouge, he studied Jazz Music Theory under the
leadership of world-renowned jazz artist and educator, Alvin Batiste. During this
time, Kafele was establishing a reputation by performing at various venues in
Louisiana, Georgia, Texas and Alabama. He collaborated with a group of talented
musicians to form The Kafele Bandele Group. This group frequently performed at
M's Fine and Mellow Café in Baton Rouge. He also appeared at the Baton Rouge
Blues Festival, House of Blues in New Orleans and the internationally acclaimed
New Orleans Jazz and Heritage Festival. After earning a degree in Physics from
Southern University, Kafele moved to Chicago with plans to expand and elevate
his musical career.  In 2003, Kafele ofcially launched K. Kapano Records, Inc. in
which he plans to elevate his own musical career, produce other talented artists,
and perpetuate the appreciation of jazz-fusion. Already, he has released 3 albums,
including his debut CD entitled "Prodigal Moon".  His 2nd and 3rd albums are
entitled "Acid Reign" and "New Orleans Sessions" respectively.   In addition, Kafele
has successfully penetrated the Chicago music scene and has performed in
Baltimore, New York, Dallas, Detroit, Philadelphia, San Francisco, Washington
D.C. and Miami  and has been featured on various college and commercial radio
stations. He has also had the opportunity to perform internationally in
Johannesburg, Toronto, Singapore, Paris, and Indonesia.  More recently, Kafele
has been expanding into other genres, and working with a number of international
producers and record labels.  His horn arrangements can be heard on Music
Soulchild's latest CD on a song called "Dowehaveto".  Kafele has also released
several singles which which have been responsible for expanding his reach.  Most
notably, He released a song entitled "Complicated" on GoGo Records with Ralf
Gum (Germany).  His latet single, "Beliving", has been released by UPZ (AKA Avi
Elman) of So What Records (Israel) and is doing well in South Africa with the help
of  the newly released music video for the song.  Kafele is a musical visionary who
believes that there is a difference between music produced for the sole purpose of
making money and music created as an expression of one's inner self. He hopes
that listeners will recognize this difference in his music. In his own words, "Music is
a true reection of the heart and soul."