What do you get when you mix the wordplay of Nas with the consciousness of Mos Def? The answer is Joe C.L.A.S.S.I.C. Emerging from New York City, Joe C.L.A.S.S.I.C unique style has more than lifted a few eyebrows. His music has earned him praise amongst his peers since the age of 14. He recently caught the attention of DJ Teddy King of B.E.T's "The Deal". His collaboration with DJ Teddy King on "What's The Hype" Mixtape solidified his position within the music world. His ear for blues, alternative and house truly makes him unique. The recent lose of his great grandmother has not stopped him from pursuing his dream of reaching millions of people through music. With a growing fan base and a motto of "Not Try'na To Change The Game- Gonna Save It", Joe C.L.A.S.S.I.C is undeniably an artist you will see emerge to the top! Joe C.L.A.S.S.I.C was born Joseph Boykin in Kings County Hospital in Brooklyn New York and raised in Sethlow Housing Apartments. At the age of 10 years old he moved into Polo Grounds Housing Apartments and most recently resides in Virginia. ANatural always possessed a deep love for music & writing. At the young age of eight his interest to create music was sparked by such pioneers as Wu Tang Clan, Heltah Skeltah and Boot Camp Clik. Brooklyn Day captivated ANaturals attention to gain more knowledge about the music industry and influenced his decision to pursue music. While in Junior High School Joe C.L.A.S.S.I.C met a talented music professor named Scott Man who helped him land his first radio commercial earning him his 1st royalty check. Joe C.L.A.S.S.I.C teamed up with New York based production teams and recorded at landmark studios such as Bang Studio (N.Y), Squad Studio (N.Y), and Mystic Studio (S.I). Soon after, he was offered a publishing deal which fell through. Accustomed to the storms of life; Joe C.L.A.S.S.I.C decided to move forward and find his place within the music industry by minimizing his circle and planning ahead more carefully. With Timeless Muzic Entertainment Management and a newly defined sound he is now equipped with the necessary tools needed to make a lasting impression. 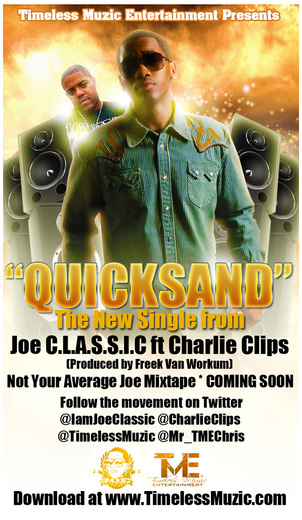