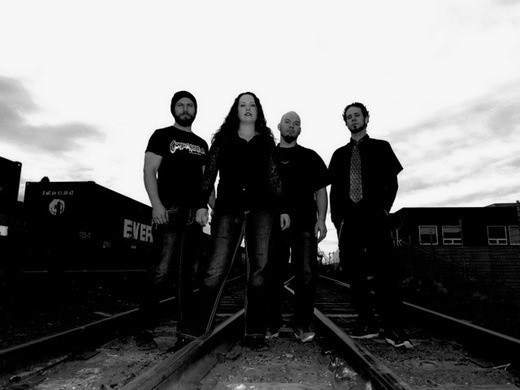 Brett and Erica Poindexter met in Central Oregon where they began playing shows together in prior bands. They decided to start a new project together and began writing. Erica's first choice for a band name was Halo Haven and after months of stewing they finally settled on it. Halo Haven is a safe haven where Erica can write and express herself, free of the troubles here on earth.

Erica started singing on youth group nights at a gospel church and wound up playing in a cover band for 10 years where she had the pleasure of opening for Jimmy Buffet in Las Vegas. She eventually moved on to create a few original bands (A Black August, Wiretap, and The Vaulted) in later years. After 15 years of singing in bands, she can’t see her life without music.

Brett found his passion for guitar at 13 years old and wound up teaching guitar at merely 18. He formed a few original bands, Vile Decent, Dexx (formed with his brother and sister, stemming from their last name Poindexter), and then StillFear, followed by Halo Haven. StillFear was also accompanied by Tim Francis on bass and they've had the opportunity to play with Powerman 5000. Many would say that Brett is a truly amazing musician and songwriter

Tim Francis has been playing in heavy rock bands for over 10 years and when StillFear went on hiatus, Tim joined Halo Haven. He has been a perfect match for Brett's guitar technique and abilities

Garret Bergstrom started playing drums at age 9. By his sophomore year in high school he had joined his first band called Orchi Bort where he honed much of his percussion style. While serving in the U.S. Air Force, he formed an all military band called Black Flashed White. After leaving the military and returning to his home town of Bend, OR, he began looking for a band that fit his metal background. Fortunately, it wasn't long before he found Halo Haven and the second album writing began with an all new energy and refreshing change in style!