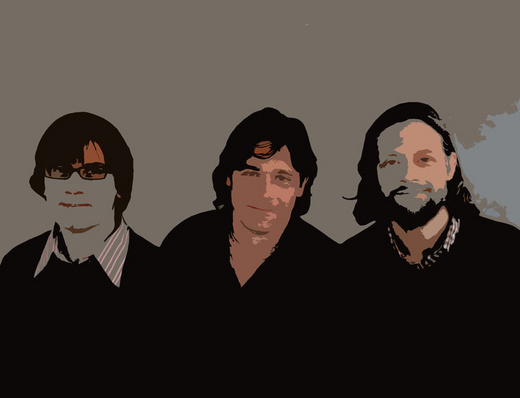 "With its semicountrified, punk-influenced music that recalls Neil Young, Clem Snide, the Flaming Lips, and an assortment of '90s alternarock bands, the group doesn't simply pull off acoustic trio rock, it makes it seem natural." -- The Boston Glob

"Without settling too comfortably into any one particular niché of the contemporary folk-rock scene Three Cheers for the Cheated is a big step up from Fancy Trash's debut, showcasing the band's strengths on 11 varied, energetic songs." -- All Music Guid

"Acoustic rock with a punk aesthetic retains an ironic charm, especially when tackled with the sloppy idealism of a band like Fancy Trash." -- Nashville Scen

The solid lineup of Dave Houghton (vocals, guitars), Paul Kochanski (upright bass) and Jason Smith (drums) continues to explore new ways to bring out the folk for the anti-folk in their November release, ‘For the Kids’.

Fancy Trash has toured extensively up and down the Eastcoast and through the Midwest. They've been on the road with DeVotchKa and Basia Bulat and have opened for touring acts such as The Jayhawks, Marah, The New Amsterdams, Hackensaw Boys, and Jesse Malin, as well as shared bills with notable regional acts like Matthew Hebert (Haunt) and Mark Mulcahy

Fancy Trash's charged live shows earned the band a reputation as a successful headliner at venues around the Northeast such as The Rodeo Bar (NYC), T.T. the Bear's (Cambridge, MA), and Iron Horse (Northampton, MA)

Fancy Trash's most recent release, "For The Kids," is available for purchase and download from http://fancytrash.bandcamp.com/