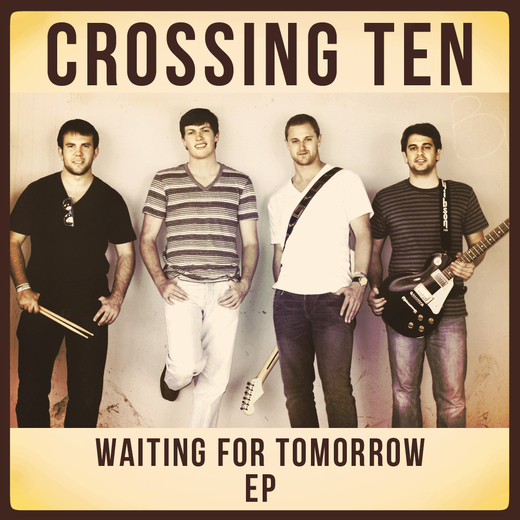 "A flavorful reincarnation of 90’s alternative rock laced with powerful vocals, Crossing Ten delivers a sound that mixes catchiness with artistic relatability.  Influenced by chart toppers such as The Foo Fighters, Counting Crows and Ryan Adams, the band was born out of music melting pots Austin and Los Angeles, and appropriately provides a quintessential merge of South and West. The band began as a duo in 2007, when Jason Carter (Drums, Keys) met Billy O'Malley (Lead Guitar, Bass), while the two studied at the University of Southern California. George Birge (Lead Vocal and Guitar) and Cody Cooper (Vocals, Guitar and Bass), both longtime childhood friends of Carter, would join in 2008 to complete the quartet. Recently a finalist in MTV’s Skins Song Placement Competition with their single “Wait, Wait, Wait”, Crossing Ten’s music fiercely punctuates dynamic guitar chords and beat with authentic lyric. Birge sings with a candor and strength reminiscent of Adam Duritz intertwined with a vulnerability similar to that of The Fray and Kings of Leon.  The band, whose name reportedly signifies Interstate 10’s connecting Texas to California, released their debut EP, Waiting for Tomorrow, in 2012.  Though Crossing Ten still remains geographically separated by the interstate thru which it got its’ name, the group continues to transcend the sentimentality of other bands in the genre, providing listeners of all ages an effortless intersection of western lackadaisical and southern strings, and paving the way for national accolade.