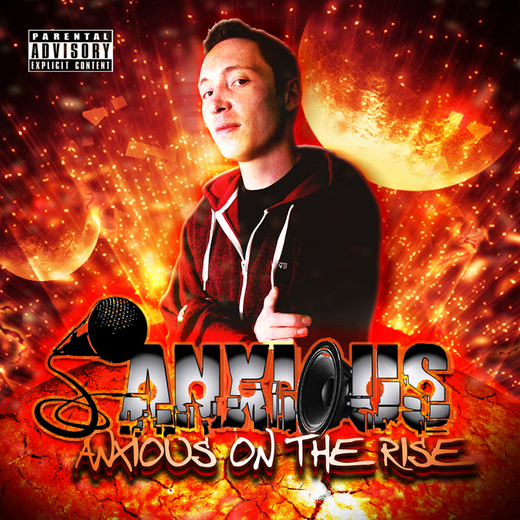 Anxious was born Ryan Hyde on December 2nd, 1985 in Denver, Colorado. Anxious has always had talent as an entertainer.  Before the age of 10 he was playing the piano, saxophone and writing lyrics.  As a teenager, Anxious starred in several garage/cover bands with his natural ability to play the guitar, bass, drums and vocals.  Before 2010, Anxious had recorded over ten underground albums in the rock and rap genre.  In 2010, Anxious co-founded Right 2 Record Music Group with Publisher/Manager, Adam Van Vranken and Producer/Engineer, Joe Reinhard.  With the founding of Right 2 Record, Anxious has been able to independently record and publish two rap albums “Almost Famous” (2011) and “Anxious On The Rise” (2012). Anxious’ favorite part of the creation of music is writing lyrics which is why he almost exclusively works in the rap genre now.  With over a thousand hours of studio time and hundreds of live performances under his belt, Anxious is now one of the premier independent musical artists in Denver.  Anxious has had the honor of opening for many national acts like, The Flobots, Talib Kweli, Blackalicious, Dead Prez, Mobb Deep and The Alchemist.  Anxious is also known for winning rap many battles and contests.  Since 2010, Anxious has won over $10,000 worth of cash and prizes at both freestyle battles and talent showcases with judges.  Anxious continues to grow locally and is on the cusp of a national breakthrough after his winning performance at the 2012 Core DJ Mixshow Live in Atlanta.